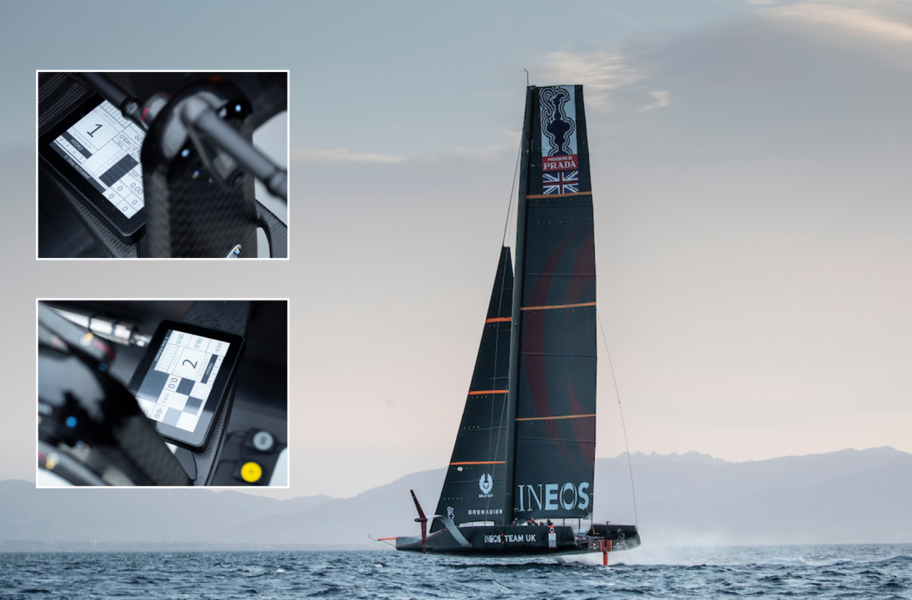 The America’s Cup is sailing’s premier competition; raced in front of grandstands close to shore at speeds in excess of 50mph. The new hydrofoiling America’s Cup boat is a miracle of engineering as it flies above the water. The speed – and the complexity of the hydrofoiling systems that enable such speeds – are new to the sport of sailing. The first Cup boats to foil were those that raced for the 34th America’s Cup in 2013.

One of the consequences of the dramatic increase in speed is that everything happens faster. The crew must be aware of many different sources of information and be prepared to react to them instantly to keep the boat flying flat and fast. The technical complexity of the boat means that a lot of this information is delivered from the boat’s instrument system and hundreds of sensors.

Ben Ainslie, Team Principal and Skipper of INEOS TEAM UK commented: “It’s impossible to sail these incredibly advanced and sophisticated boats without data, and getting that data in a fast, highly-readable format in the extreme environment of an AC75 cockpit is a real challenge.”

It was critical to find a way to deliver the data to the crew efficiently. The solution was a bespoke e-paper display built by British company Papercast that will be aboard INEOS TEAM UK’s race boat for the America’s Cup in Auckland in 2021. 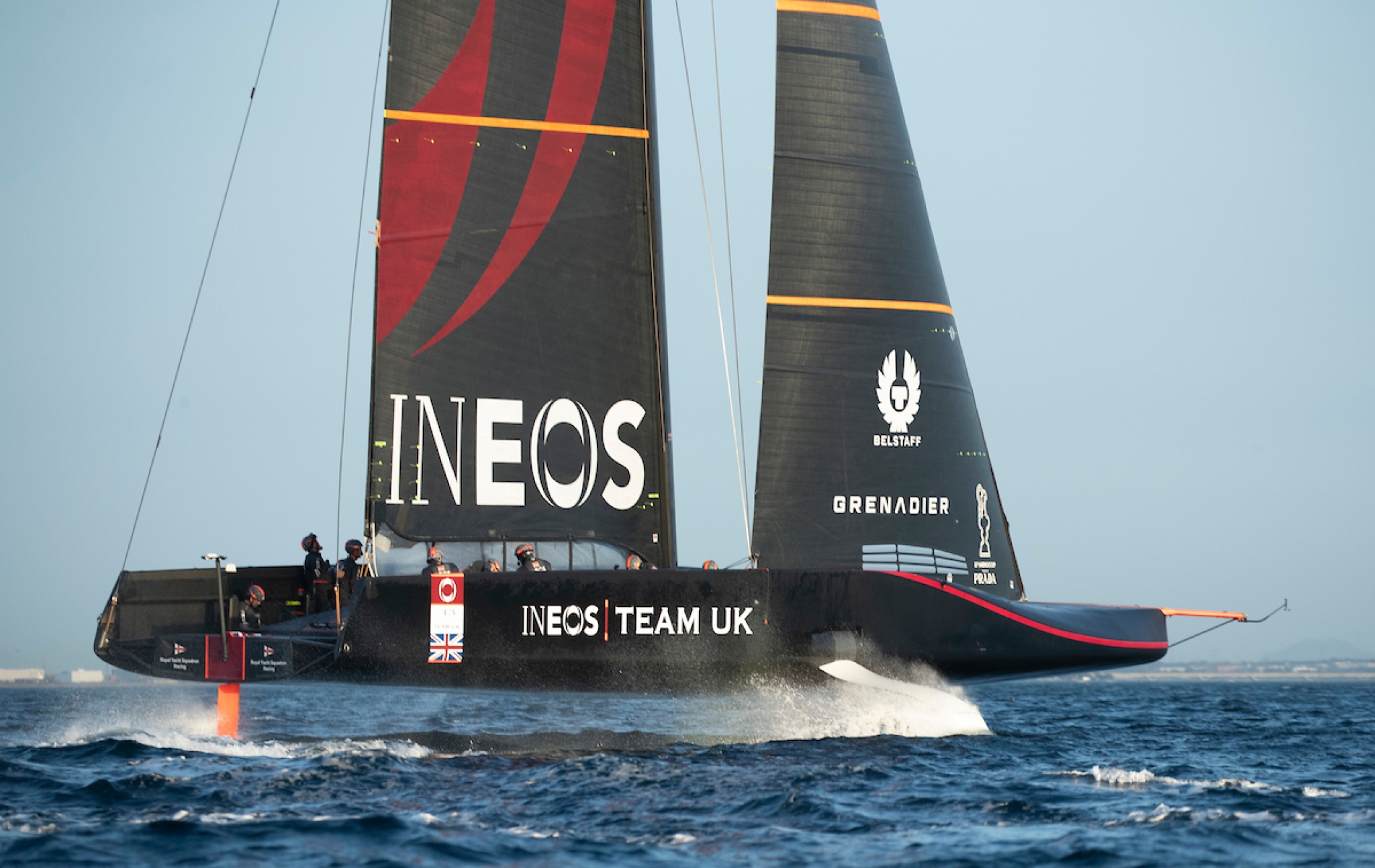 The new America’s Cup boats are called AC75s – although the hull is a little under 68 feet long with the rest of the 75 feet in the bowsprit. It’s a monohull, or single-hulled boat, driven by a soft-wingsail, and it will fly above the water supported by one or other of two T-foils. They will be controlled by a battery powered, hydraulically actuated and human initiated system.

These boats are a very long way from the stately schooners that first contested the Cup back in 1851. It all began with a race around the Isle of Wight, organised by the Royal Yacht Squadron and won by a yacht called America. The Cup departed British shores with America and a few years later was gifted to the New York Yacht Club as a challenge trophy open to yacht clubs of all nations.

The Americans held onto the Cup for 132 years, eventually beaten by four races to three by the Australians in an extraordinary match off Newport, Rhode Island. Since then the Cup has been hosted in Perth, San Diego, Auckland, Valencia, San Francisco, Bermuda and finally back to Auckland for the 36th edition. It’s the only major international sporting trophy that Britain has failed to win, but now four-time Olympic gold medallist Ben Ainslie has combined with the founder, Chairman and major shareholder of INEOS, Jim Ratcliffe to form INEOS TEAM UK to take on the quest. 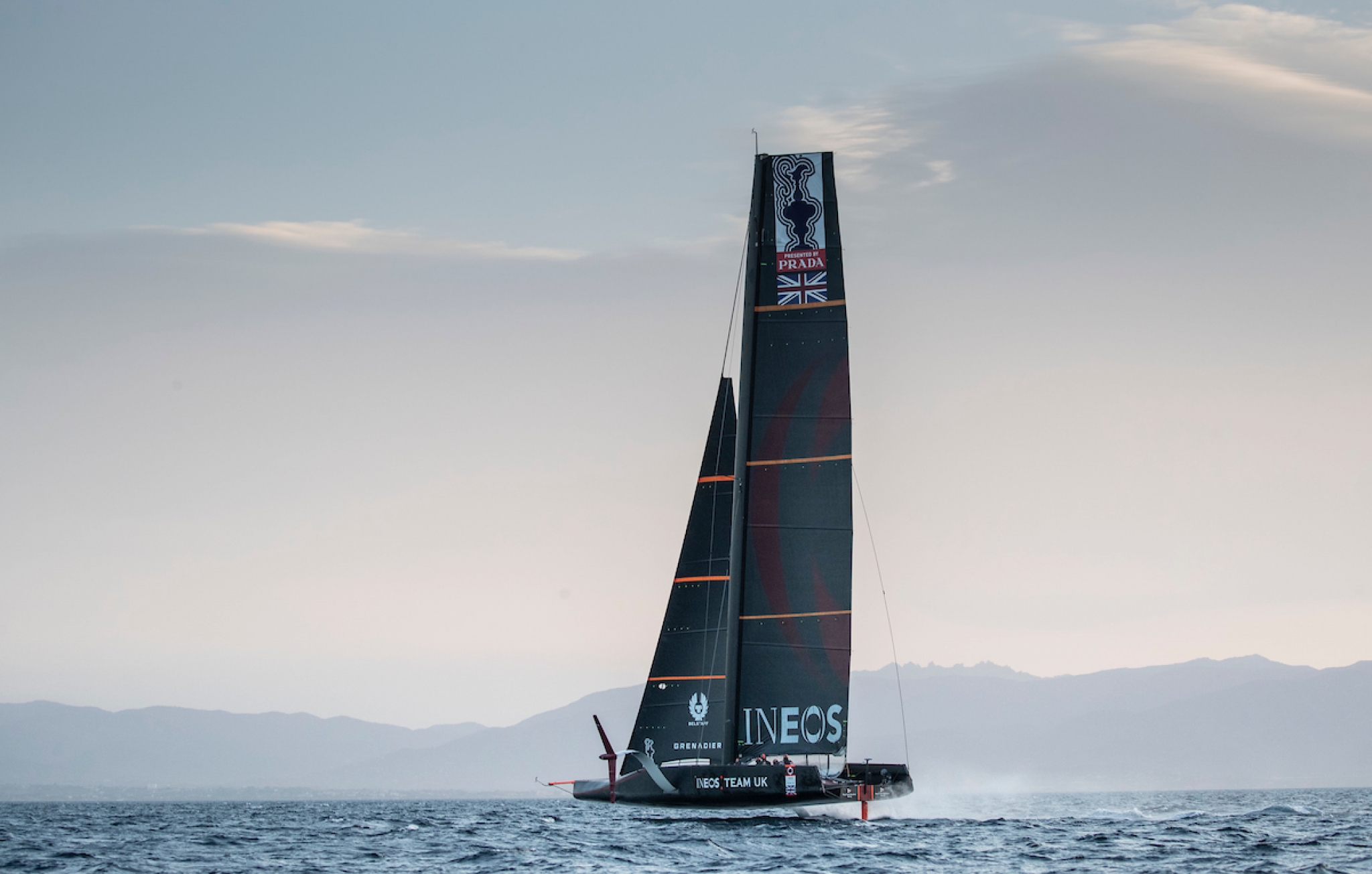 The design brief for the displays that would be used aboard the AC75 was demanding, and it was different in a couple of ways to the needs of Papercast’s normal customers. Papercast e-paper display technology was originally developed to transform real-time passenger information at bus stops around the world. Like those on the AC75, these displays needed to be highly readable in bright sunlight, robust and indifferent to temperature changes; but they didn’t need to update very often, and weight was not an issue.

Nevertheless, Papercast’s development engineers had a vast amount of experience with this technology and were confident it could be adapted to the new use.

“Now we have a major foothold in our primary market, Papercast is perfectly placed to develop its technology for use in other more demanding applications where e-paper can provide significant benefits over traditional LCD and LED technologies,” said Robert Bicket, CEO of Papercast when the project was announced.

“The America’s Cup is the pinnacle of yacht racing and this campaign is particularly close to my heart. I am delighted that our technology will form one of the many vital components that will make this one of the strongest British AC challengers that this country has ever seen.” 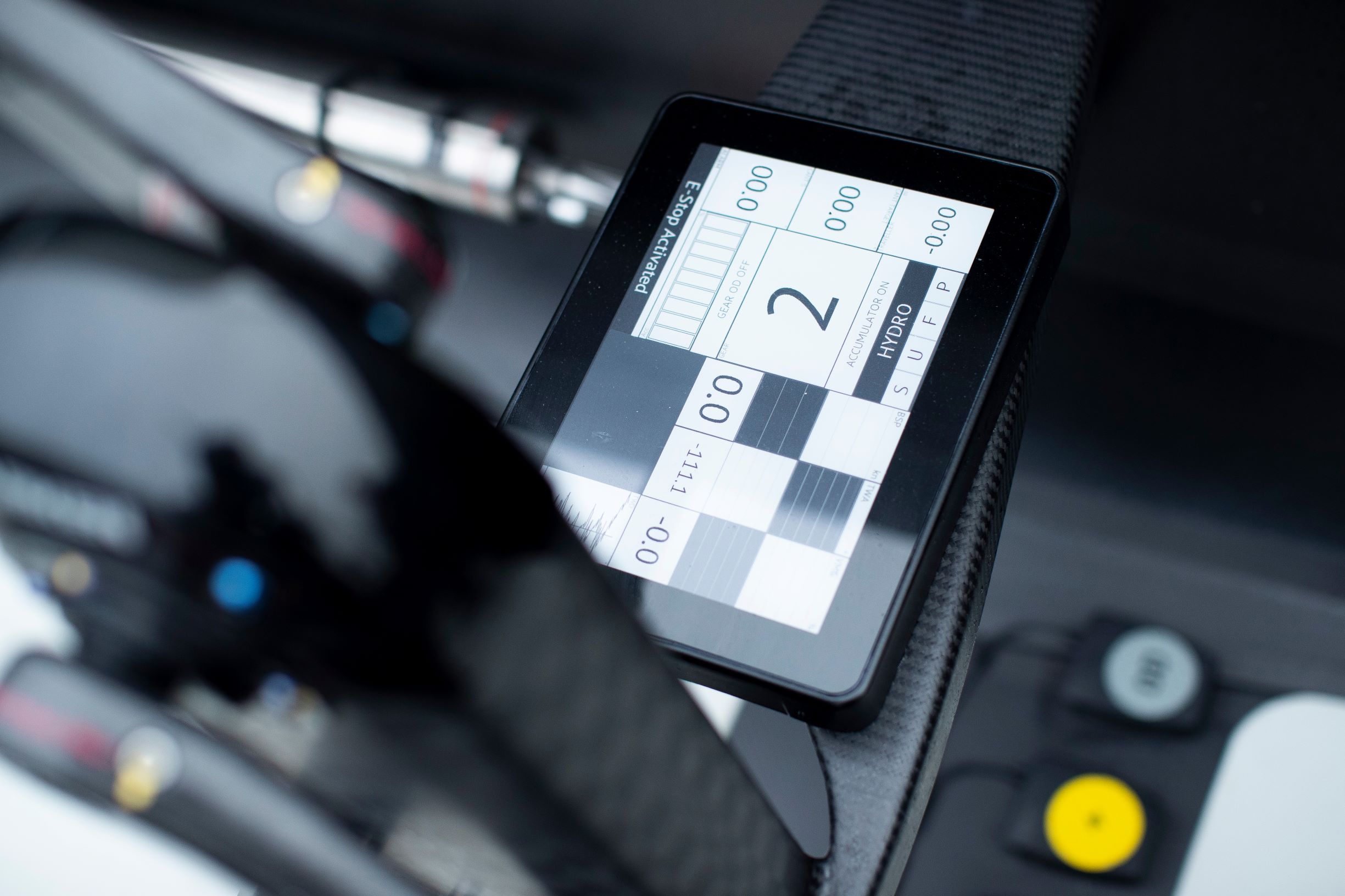 The e-paper displays – used ubiquitously in eReaders — offer many advantages, the most well-known being that their visibility improves in bright sunlight. This contrasts with more conventional LCD or LED displays which rely on backlighting to make the display visible. The sunnier it gets the more power the LCD displays require to stop them washing out and becoming unreadable – anyone with a smartphone will have had this experience. All this backlighting requires electrical power, and that means extra weight in batteries that the team didn’t want to carry aboard their race boat.

The obvious disadvantage was the update rate, which has traditionally been slow with this technology. There are good technical reasons for this, and not just because the pages of a book don’t get turned very often. There were also problems in maintaining the consistent performance of the display across a range of temperatures. The displays also had to be integrated into the boat’s data system, they had to be lightweight but also robust enough to survive the crowded, high speed and high energy environment of an AC75 cockpit.

Papercast’s displays were already being used in very high ambient temperatures, with installations across the Middle East, where temperatures frequently exceed 50 degrees.

A new lightweight enclosure was designed, and a prototype manufactured and tested before being put into production. The team wanted the display to run at 7Hz – the update rate required to enable the crew to keep the unstable craft flying flat and fast. This also provided some technical challenges.

Pavlic again elaborates: “Despite its otherwise excellent characteristics, e-paper is renowned for its relatively slow refresh rate. Fortunately, we had previously developed some specific software drivers to achieve the seemingly impossible task of showing video animation on our screens. The lessons learnt and technology developed proved to be key in delivering the performance required by INEOS TEAM UK. In addition, we jointly developed a sophisticated and lightweight rendering protocol, to enable the crew to control different display content with ease whilst racing.”

The end result of all this hard work has been a display that is clearer to read, lighter, less power hungry, much more robust and completely configurable by the team’s software engineers. This means that every crew position on the boat could have exactly the data they wanted in a bespoke display. 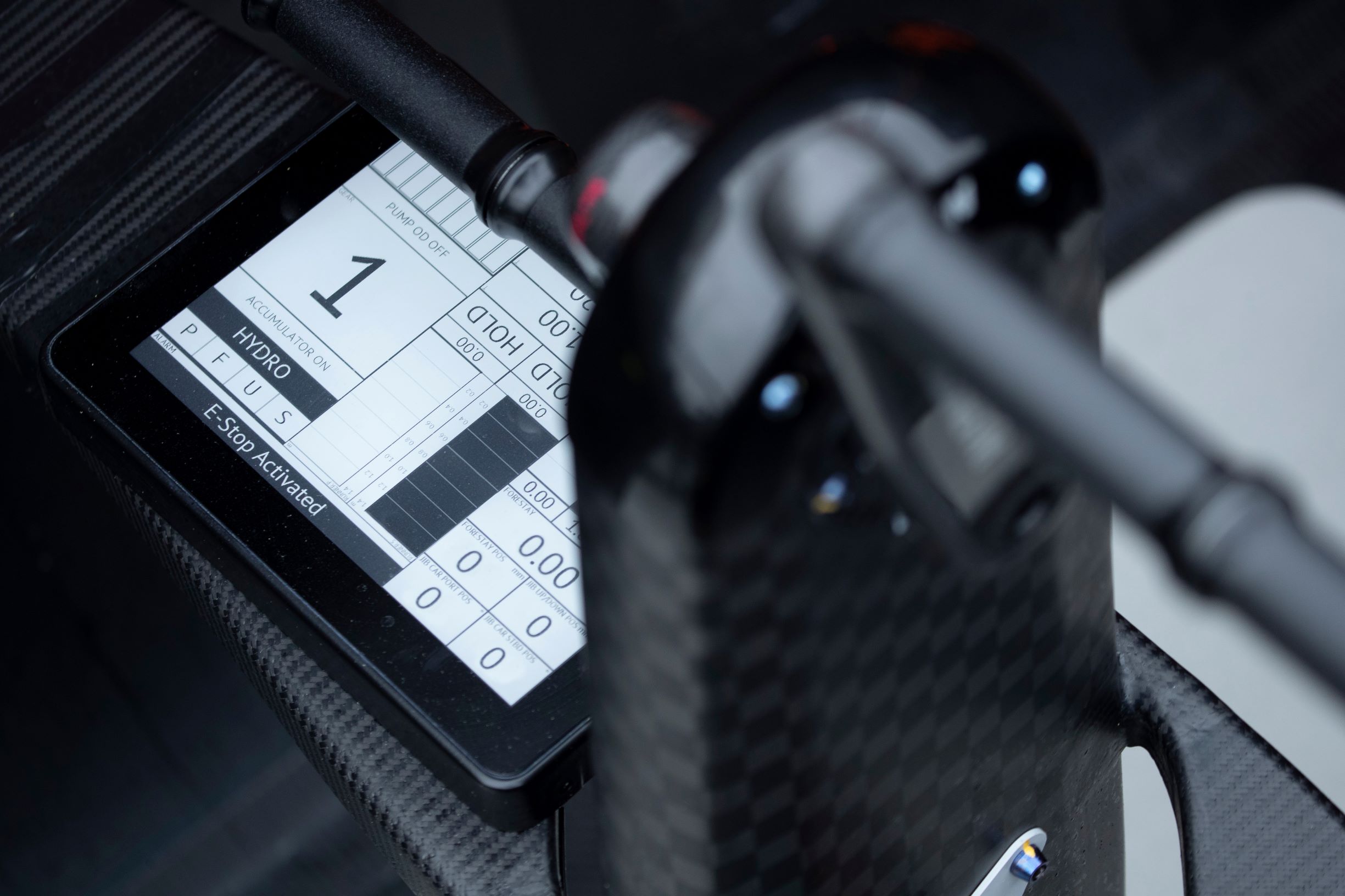 “Papercast’s display technology has done a great job of delivering information everywhere that we needed it onboard, in the different forms that the crew specified. The guys have already given the displays a hammering in training and testing, and we’re also really pleased with the resilience. It’s been a great collaboration with Papercast,” said the team’s Chief Designer, Nick Holroyd. 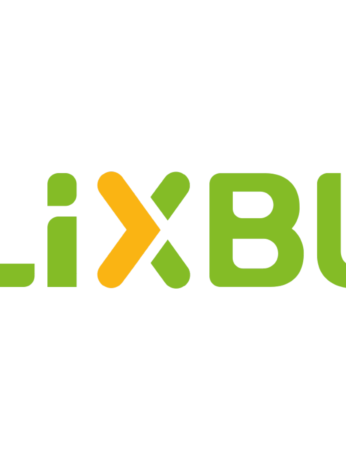 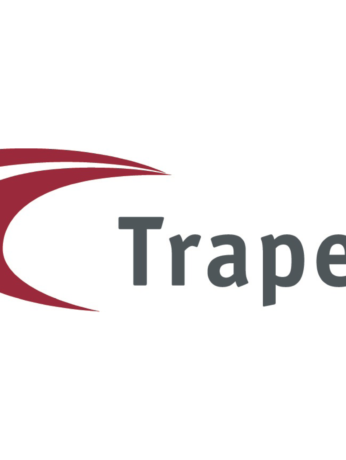